Posted by Julie Paveglio at 12:11 PM No comments:

Posted by Julie Paveglio at 10:30 AM No comments:

Nicki Minaj's Unapologetic Sexuality is Not a Crisis// Anaconda Video

Nicki Minaj's Unapologetic Sexuality is Not a Crisis 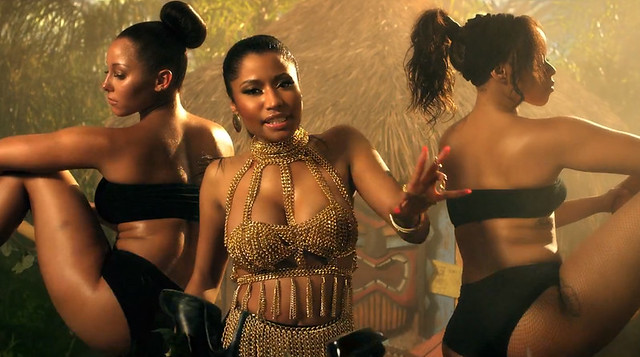 In her own way, Nicki Minaj broke the Internet. Last week, her video for “Anaconda” broke a record with 19.6 million views within a 24-hour period (besting Miley Cyrus’s “Wrecking Ball”). A month before that, Twitter and Instagram were aflutter when she posted the cover art for the latest single, with her bare posterior prominently displayed. The “Anaconda” video has generated a massive amount of discussion: At the time of this story, the YouTube page for the video alone has almost 200,000 comments—and continues to climb alongside the number of views—and there’s been coverage dissecting each part of the video’s four minutes and fifty seconds.
The loudest chatter around “Anaconda” is about Minaj’s sexuality and how she’s chosen to express it. A writer called it the “fiercest take on female sexuality of the year,” while others felt Minaj’s hypersexualization was a “letdown.” “Anaconda’s” YouTube page is littered with comments like, “Is this porn?”, “99% Porn,” and “If promoting female sexuality is displayed as a common prostitute, I think I prefer to do nothing.” A current top comment on the video apparently sums up many viewers’ opinions: “This bitch has no talent at all, so she decided to shake her ass to be famous, am I right?”
For some viewers, just owning and expressing a woman’s own sexuality is easily (and lazily) derided as pornography—especially in this case for a black woman. 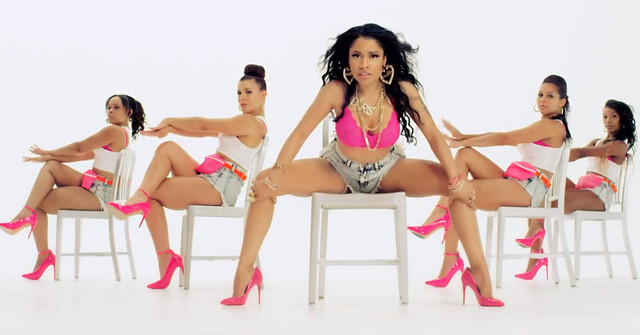 The song samples Sir Mix-a-Lot’s “Baby Got Back,” with the line, “My anaconda don't want none, unless you've got buns, hun.” It’s been more than two decades since “Baby Got Back” flashed across television screens. Watching it now, it’s funny to imagine that a song with the infamous opening lines, “I like big butts and I can not lie,” caused so much pearl-clutching controversy that it was even briefly banned on MTV. By today’s standards, the video is tame and comical, with Mix-a-Lot standing atop two gigantic butt-mounds as he raps, “Tell 'em to shake it! Shake it! Shake that healthy butt!”
Despite being perceived as grossly inappropriate, “Baby Got Back” won a Grammy and solidified its place in American pop culture canon (e.g. Seattle Symphony’s rendition of the one hit wonder). Yes, the song was overtly sexual and objectified women, but it also acknowledged a body type outside of mainstream standards of beauty that was desirable. What many casual listeners don’t realize is that the opening dialogue between Becky and her white girlfriend goes beyond “look at her butt.” Here’s how the song starts:

Oh, my, god. Becky, look at her butt. It is so big. She looks like one of those rap guys' girlfriends. But, you know, who understands those rap guys? They only talk to her because she looks like a total prostitute, okay? I mean, her butt, is just so big. I can't believe it's just so round, it's like, out there, I mean - gross. Look! She's just so ... black!

When Minaj received negative feedback after releasing the cover art for “Anaconda,” she took to her Instagram to highlight the inconsistent and—let’s be honest—racist reactions to her displaying her own body. She wrote“Angelic. Acceptable. Lol” alongside photos of white Sports Illustrated models, topless and arching their backs, with their barely-covered bottoms on the cover of the magazine.
When Lady Gaga uses her body as a form of expression, she's an “artist.” When Nicki Minaj owns her own sexuality, she's slut-shamed.
Where was the outcry against Katy Perry's “California Gurls” when she laid about nude on a puffy pink cloud, with a small piece of fluff covering her bum? Did folks call Miley Cyrus’s “Wrecking Ball” a piece of pornography when she salaciously licked a sledgehammer and writhed around naked on an actual wrecking ball? Did Jennifer Aniston face disparaging criticism for her strip scenes in last year’s We’re The Millers? Nope,they asked her how she got in shape for the role. 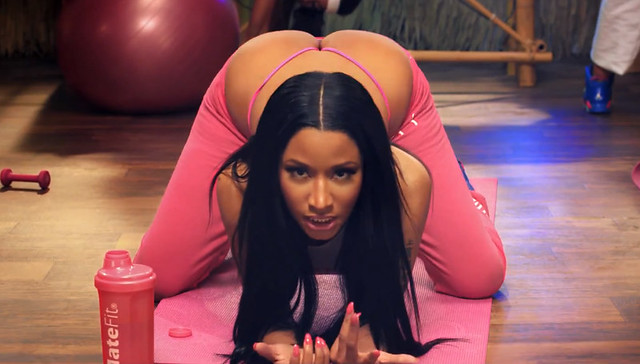 While much of the criticism for “Anaconda” surrounds Minaj’s sexuality, there hasn’t been as much discussion about the politics of black women’s sexuality, specifically. Even within the hip-hop community, there was policing of Minaj’s body from AllHipHop.com CEO Chuck Creekmur, who wrote an open letter to her pleading to cover up for the sake of his daughter, and even concern trolling her as if Minaj is having some crisis of the soul and needs an intervention of her sexuality: “When you get a quiet moment answer the following questions. How is Onika Tanya Maraj doing? How does she truly feel about Nick Minaj right now?”
Writer and Bitch contributor Phoebe Robinson succinctly calls out his open letter on her blog Blaria:

“[Anaconda] was not created specifically for Creekmur’s acceptance or approval. This is Minaj’s music and her career choice so why is he behaving as if his word carries any sort of weight? Sure, he’s allowed to have his opinions, but let’s be real. This open letter condemnation is nothing more than a man deeming a black woman’s overt sexuality as wretched when that kind of ruling is not applied to non-black women.”

It’s disingenuous for Creekmur to chastise Minaj when he’s profited and traded in music videos that have featured far racier depictions of sexuality—but mostly from male hip-hop artists. But somehow, Minaj is not afforded the same type of agency and ownership of her body and sexuality, even as the most successful female hip-hop artist at this time (and one of the most popular mainstream music acts). 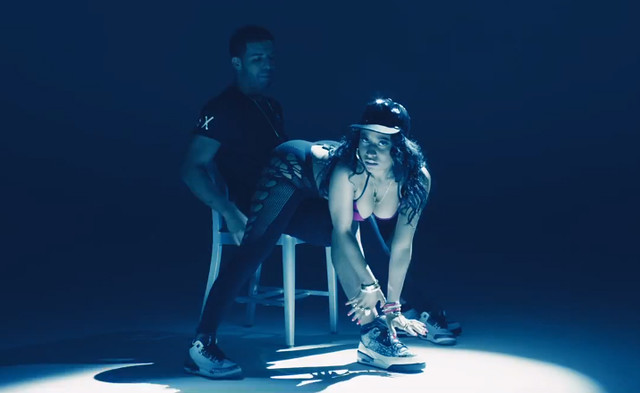 While Beyonce’s recent VMA performance was lauded as a poweful moment for feminism in pop-culture, we should recognize that although Minaj’s feminism looks different—it still matters. There are questions and criticisms that the video was shot, directed, and produced by men to satisfy the male gaze, to further perpetuate the commodification of another black female body. But this condemnation ignores and silences Minaj's voice and ability to make decisions about her own representations as an artist and a business person.
"Anaconda" shifts the common narrative of a man conquering female bodies to Minaj’s own stories of sexcapades without apologies. Towards the end, the only man in the video appears: Drake, seated in the middle of an empty room with roaming spotlights and Minaj treating him to a lap dance. In the final seconds, he reaches to touch Minaj’s ass after she had been flaunting it in his face, and she immediately swats his hand and struts away. Her body belongs to her, and she can twerk it and work it however she pleases, and she doesn’t owe anything to anyone.
Related Reading: The VMAs Cemented Feminism as Beyoncé's Brand. What Comes Next?
Amy Lam is Bitch's associate editor. She tweets at @amyadoyzie.
Posted by Julie Paveglio at 8:20 PM No comments:


Posted by Julie Paveglio at 7:11 PM No comments:


another
down the street
to
Shorty
who owes them $
Posted by Julie Paveglio at 4:03 PM No comments: 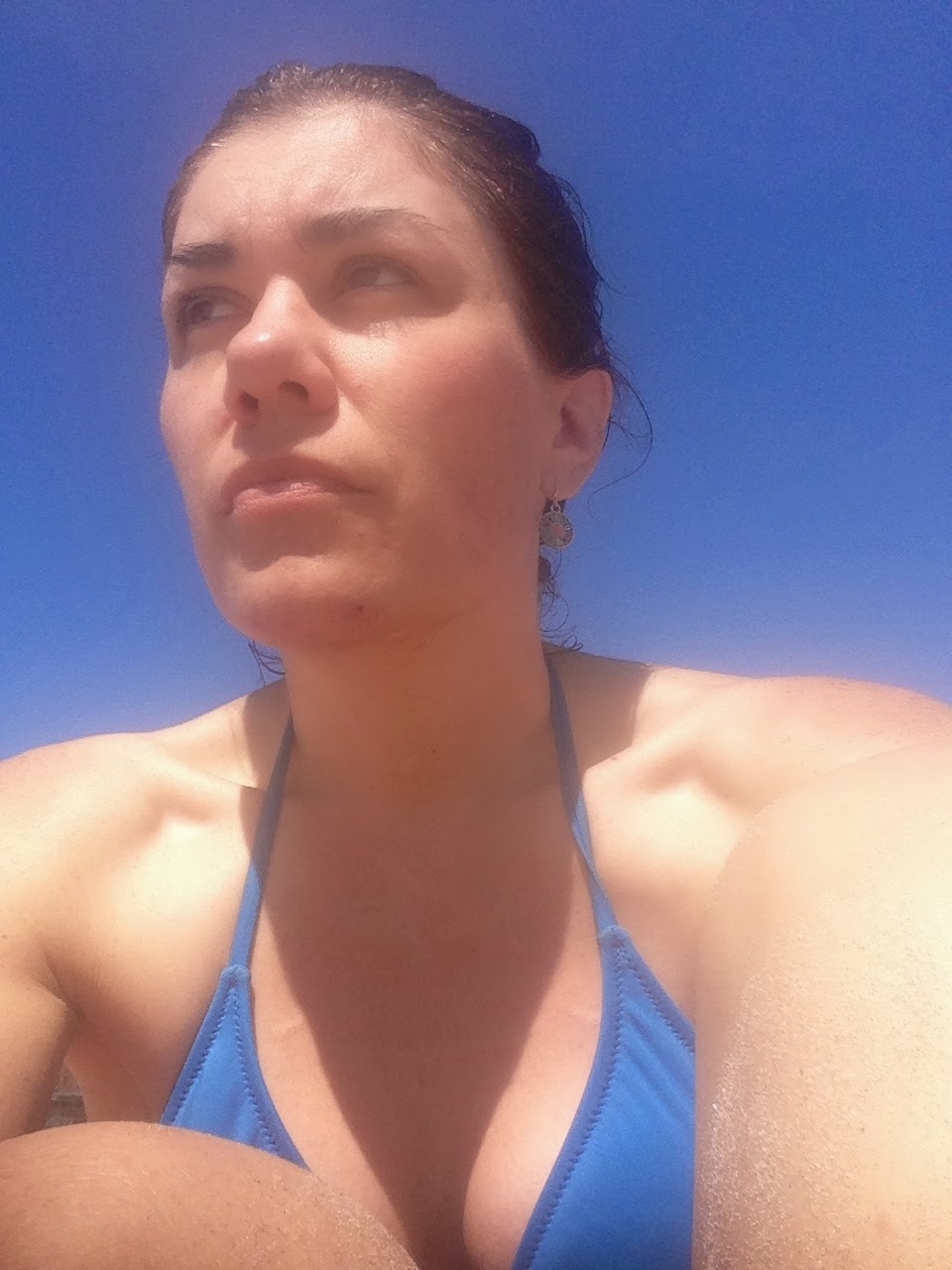 Posted by Julie Paveglio at 9:33 AM No comments: