Once there
now gone-
eternity shifts
form
from
loosing or gaining,
faces.
Posted by Julie Paveglio at 3:35 PM No comments:

Email ThisBlogThis!Share to TwitterShare to FacebookShare to Pinterest
Labels: 2015, writing

Posted by Julie Paveglio at 7:36 PM No comments:

Email ThisBlogThis!Share to TwitterShare to FacebookShare to Pinterest
Labels: I Fell Like A Fucking Flower, Kinski, music, tunes

Ornette Coleman: What I've Learned
The jazzman on the meaning of God, the secret to the human experience, and how to tell the difference between love and sex

I'm from Fort Worth, Texas. Fort Worth has lots of what are known as "cowboys."
I wasn't so interested in being paid. I wanted to be heard. That's why I'm broke.
The only thing my mother would say to me about my music — I'd say, "Mom, listen to this," and she'd say, "Junior, I know who you are."
There were always lots of musicians in my hometown, and I found some guys, main man named Thomas Connors, called Red. Red Connors in Fort Worth was an amazing player, like Sonny Rollins before Sonny Rollins. I liked to go to his house. He came from a holy church. And that became my church.

I didn't need to worry about keys, chords, melody if I had that emotion that brought tears and laughter to people's hearts.
The Jim Hotel. In my hometown, the rich, the blind, the prostitute — everybody would come there after midnight. There'd be some violence, of course. But that's a place you'd go to get yourself a room and get laid at the same time. You get there, and before you know it, you're on your way to the room. Do you understand? All the musicians from the rich hotels would finish work and go jam at the Jim.

How is it that something that you care for would not let you love it?
I'll try any instrument. If you're doing something you've never done before, it's easier to feel more relaxed about it. When you're doing something you have done before, and you can't make it any better, then it starts the worry.
Most people think of entertainment as getting your girl and taking her out to eat, which is not too bad. My idea of entertainment is a little different.
People like to make people feel jealous.
The human experience is a simple struggle to get in charge of the things that are seen as valuable.
How can I turn emotion into knowledge? That's what I try to do with my horn.
It's not that I reject categories. It's that I don't really know what categories are.
You take the alphabet of the English language. A to Z. A symbol attached to a sound. In music you have what are called notes and the key. In life you've got an idea and an emotion. We think of them as different concepts. To me, there is no difference.
It's easier to copy someone else than to find out how to avoid sounding like someone else.
The violin, the saxophone, the trumpet: Each makes a very different sound but the very same notes. That's pretty heavy, you know? Imagine how many different races make up the human race. I'm called colored, you're called white, he's called something else. We still got an asshole and a mouth. Pardon me.
I don't try to please when I play. I try to cure.
When I was coming up and would go see someone play, he'd always say, "Don't watch my hands, don't watch my fingers," and I'd think to myself, Why?
I never thought about being famous or rich. I just thought, Oh, I'll get a nice little girl and go and play every night, and I'd be happy. And that worked for a while. But the little girl's mother didn't trust a guy with a horn.
Dog spelled backward is God. That's pretty heavy.
Talk of God is most often in church. Is there a God outside of church? I hope so. But how should I know? How does anybody know?


Difference between sex and love? Well, you're not always sure you're in love. But when you're having sex, there's really no mistaking it.
Posted by Julie Paveglio at 9:24 PM No comments:

Laurie Anderson
It was a large room.
Full of people.
All kinds.
And they had all arrived at the same buidling at more or less the same time.
And they were all free.
And they were all asking themselves the same question:
What is behind that curtain?
You were born.
And so you're free.
So happy birthday.
Posted by Julie Paveglio at 8:18 PM No comments:

Posted by Julie Paveglio at 8:17 PM No comments:

will do this
comforted by color and images
nets gone

I alone
wake up
move a brush
dead weight disappears

Posted by Julie Paveglio at 2:57 PM No comments:

I would like Disneyland
if they had an "Auschwitz"
and I could enact
one of my Polish ancestors
starving to death
or being lead to a gas chamber.
Posted by Julie Paveglio at 12:48 AM No comments:

Beyond Space and Time 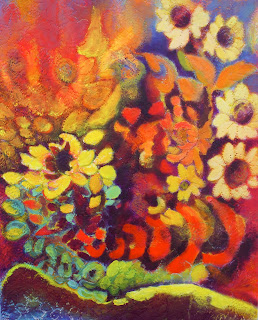